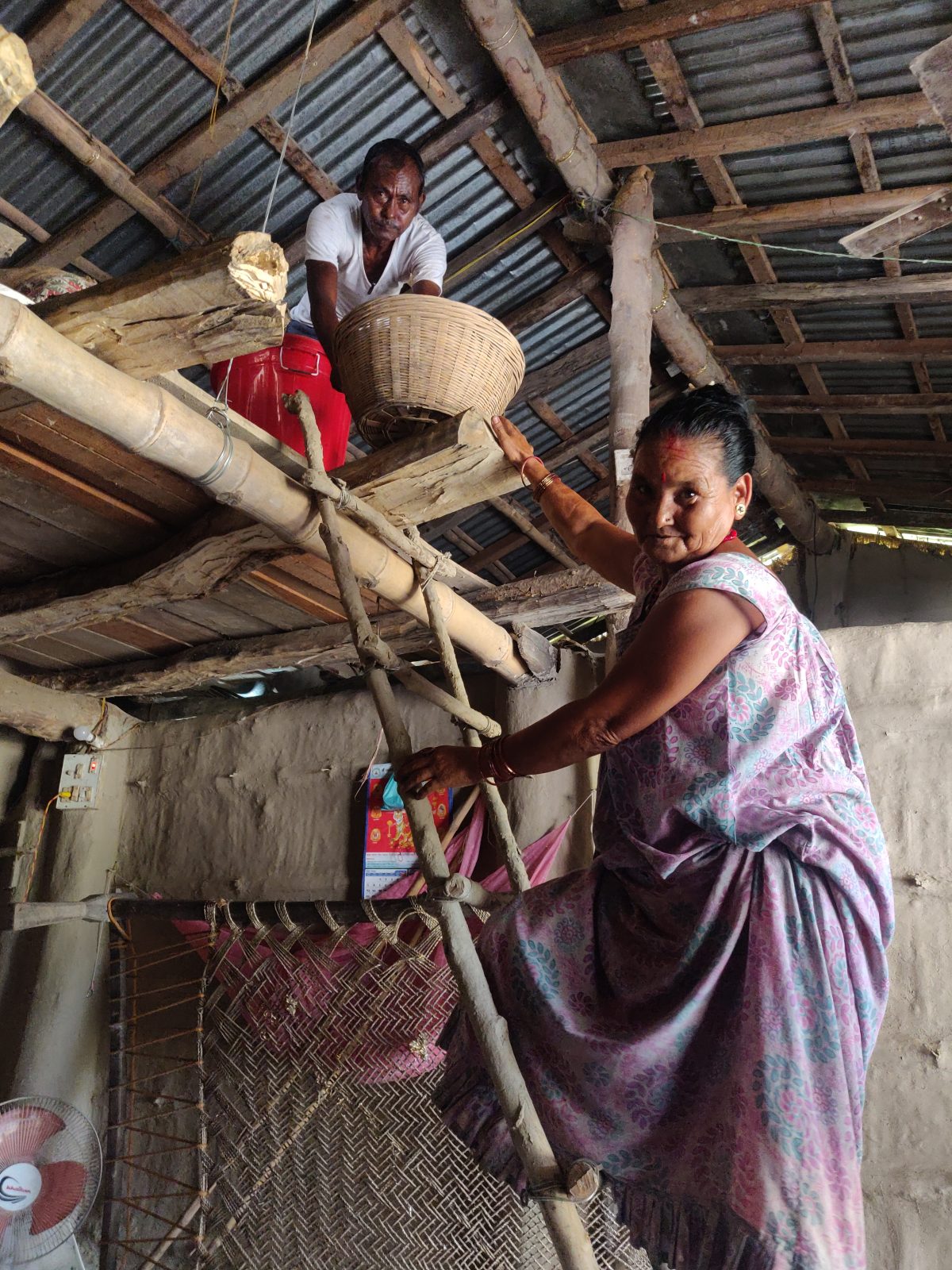 Bhima Khatri, 52 from Bhajani Municipality, Kailali district shares, “As far as I can recall, floods have always been a big problem in our village. Our village lies on low land and it is surrounded by two rivers from two sides. Over the years we have learned to mitigate the impact of floods. We now focus more on cultivating winter crops that are planted after the monsoon. We have also built an upper storey in our house where we place our crops, documents, and important belongings to protect them from inundation. But there is only so much we can do as disasters get bigger and bigger every year. In 2020, I remember it had been raining continuously for 8-10 hours, which is a sure sign that the village will be flooded. At around 9 PM in the night, we started packing our belongings. We took our livestock with us to the highway, which is on higher ground, and stayed there all night. The downpour was heavy and continuous. My house and crops were destroyed. The Nepal Red Cross Society (NRCS) and local government authorities were here by the next day. They set up temporary shelters and toilets. We received food, water purifiers, masks, sanitizers, soaps, and other daily essential items. We stayed there for 15 days as we couldn’t go back to our houses before the rain stopped and all the water receded. It was a very difficult and uncomfortable situation. But we were grateful to have received the support on time. It made the situation bearable.”

During floods in 2020, approximately 1900 families were completely displaced and 1200 partially displaced in Bhajani Municipality, Kailali district. Thim B. Panadi is the Disaster Risk Reduction focal person from Bhajani. He immediately coordinated with the NRCS and local government authorities to conduct an Initial Rapid Assessment (IRA) that helped to identify the areas that had been impacted the most and immediate needs of the impacted communities. He had received training from the NRCS on conducting the assessment and felt confident to take the work forward.

With the support from the European Union Civil Protection and Humanitarian Aid Operations and the Danish Red Cross, the NRCS has been working to strengthen the government’s and the NRCS District and Sub-chapters’ response capacities. One of the tools introduced by the EU-funded project “Preparedness for Emergency Response in the Western Region of Nepal” is the Initial Rapid Assessment (IRA). Within 24 hours of a disaster, the IRA is conducted to give a general overview of the impact of the disaster and identify immediate needs. Based on the identified impacts and needs, relief work is planned and organized between multiple government agencies and humanitarian organizations.

Thanks to the information provided by the IRA, the relief support of daily essentials such as temporary shelters, toilets, drinking water, dignity kits for women and girls etc. were provided to the affected families for sufficient number of days. Thim shares, “The assessment was also helpful to streamline the support provided by many humanitarian organizations. Based on the assessment, we were able to clearly identify and categorize immediate needs and connect them with the organizations who could fulfill them.”

In the next phase, the Municipality conducted a more in-depth assessment in the affected areas identified by the IRA, to plan for longer term support. The assessment focused on six areas – Women, children, sr. citizen and other vulnerable groups, health, education, agriculture, veterinary and infrastructure. Thim adds, “We had clear ground level evidence. Based on the assessment, we planned for longer-term projects together with donors and humanitarian organizations.”

The IRA provided a foundation upon which the local government were able to plan and organize their response. Due to this, families such as Bhima’s were able to receive the humanitarian support they needed to recover from the disaster. Eventually, Bhima’s family received NPR 10,000 cash support which they invested in rebuilding their house as well as seed money to start a tea shop to diversify their source of income.

After continuous work on improving and standardizing the IRA guideline, it was endorsed by the government in June 2021. This ensures that the IRA is embedded into the emergency response system of the government and the NRCS. In case of any disaster, the IRA is immediately conducted to analyze the ground situation to plan and prepare adequate and timely emergency response. A mobile application called IRA Nepal has also been developed to gather and consolidate the information on a web-based portal, which is time efficient and reduces the risk of data loss.

It has now become a standard practice to conduct an IRA in any type of disaster. During 2020 and 2021, the Government of Nepal together with the NRCS and local police conducted 94 IRAs to identify immediate needs, potentially saving the lives of the affected people and alleviating their suffering.