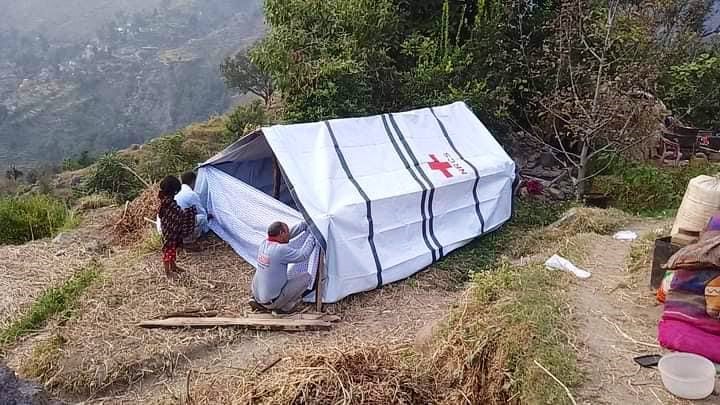 Early in the morning around 2:12 AM on 9 November 2022, a magnitude of 6.6 earthquake hit the Western part of Nepal. The epicenter of the quake was Dipayal Municipality, Doti District of Sudurpaschim Province, within the sparsely populated area ear by the Khaptad National Park. The tremor was felt to the neighbouring districts (Bajhang, Kailali, Kanchanpur, Banke, Rukum West) as well as to some parts of India, including New Delhi. Due to the quake, more than 200 families have been affected.

Following the earthquake, NRCS volunteers at Doti District Chapter are engaged in providing response and relief to the affected. With the approach of the winter season, NRCS is scaling up its distribution of non-food items and supporting for some transitional shelter solutions for the most vulnerable households. So far, NRCS has distributed 282 tarpaulins, 190 mattresses, 16 utensil sets in the affected area.  The Society has also provided First Aid service to the injured followed by 10 squatting plates for temporary toilet construction and dignity kits and solar lamps in collaboration with other development partners.